Get a PDF version of this Tech Tip HERE
By Verisurf Software, Inc.

The requirement to align objects to gravity (Level and Plumb) in large volume metrology is common. Large aerospace tooling, machines, foundations, and structures must all be leveled to gravity to ensure proper performance.

When working on large, floor-mounted tooling structures, it is common to use gravity in the form of Level and Plumb to maintain the basic configuration of the tool as gravity is a constant in every environment. This is particularly important when these large tooling structures are comprised of multiple base components as can be found in factories that build large aircraft components. While smaller tools can be held in a constant plane, large tools with multiple base components use “jacks” and Level and Plumb to maintain tool configuration.

During construction of a large Tool, Level and Plumb is monitored daily to ensure the basic configuration of the Tool has not changed significantly. The Level and Plumb processes are accomplished using many different types of Measurement Devices such as Optical/Digital Levels, Transits, Theodolites, Total Stations, and Laser Trackers.

Machines typically require only a leveling process to ensure the Machine Bed is Level to gravity which provides an accurate relationship of the Machine Head and the part mounted on the Machine Bed. This process is typically done when the Machine is set up and then verified periodically or when the machine head crashes into a part.

Above – A Laser Tracker Levelling a Machine Bed

These terms are often referred to as being one and the same when they are fundamentally different.

In the case of Machine Beds, Flatness and Level can be equally important, whereas, for structures, the requirement may only be Level to particular locations on the structure.

How to Level an Object using Verisurf

To Level and Plumb an object in Verisurf, the measurement device must have “Tilt Sensors” and be “Oriented to Gravity” through the Verisurf Device Interface (VDI). This process will vary depending on which type of device is connected to Verisurf.

To quickly align the measurement device using points on the object and the Gravity Vector of the active Device:

In the Feature Align dialog box the Primary Plane and Align Axis must be set to NONE. Verisurf then defaults the alignment axis to the Z+ standing axis of the Device that was previously leveled to gravity in the VDI. 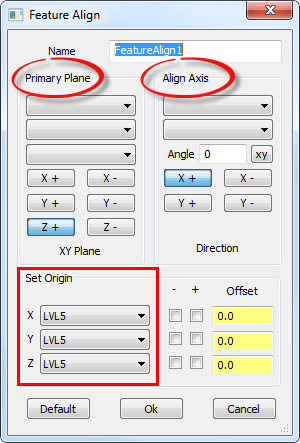 Verisurf automatically sets the point with the highest Z value as the Origin of the Alignment.

The operator needs only to select OK and proceed to level the object using a Digital Readout (DRO) from the Device Manager (below right).

Using the Custom dropdown, the operator may customize the DRO to display ‘Z’ only. 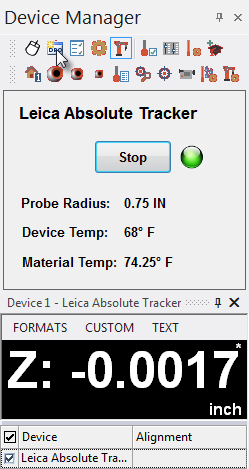 How to Plumb an Object Using Verisurf

To “Plumb” means to make vertical relative to gravity. In Verisurf, this capability is enabled by making one adjustment to the Feature Align to make it easy to understand for the operator performing the task of “Plumbing”.  The operator must measure two points at the base of the vertical plane to be “Plumbed”.  Choose “Align Axis” to create a Working Coordinate System (shown below).

In the Feature Align dialog box, the Primary Plane must be set to NONE. This defaults the Z+ axis to the Device Z+ standing axis that was previously leveled to gravity in the Verisurf Device Interface.

In the Align Axis group define the Axis that is parallel to the surface/features to be “plumbed”. The actual “Level” conditions of these points are not critical as Verisurf uses the “Standing Axis” of the Measurement device to determine the “True” Vertical Axis (in this example Z+). Using the secondary Axis merely provides directional information for the Alignment to aid in the “Plumbing” process. 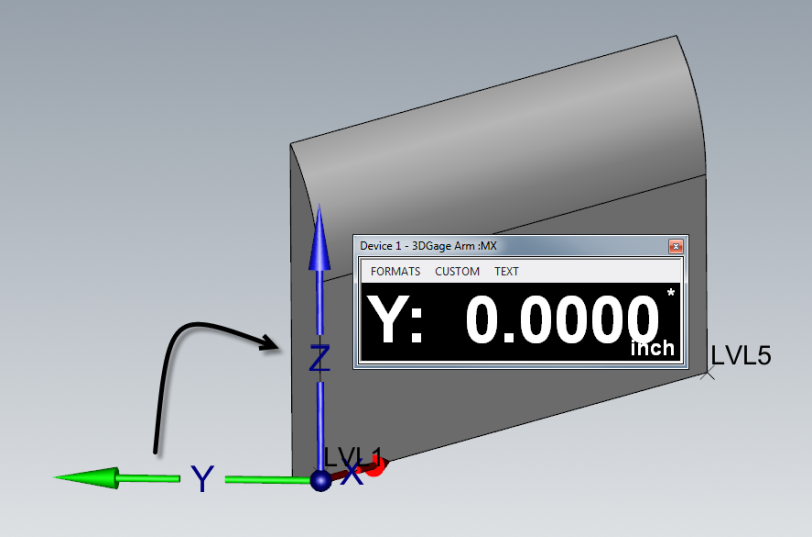 Note – If the part being Leveled and Plumbed requires significant adjustment, re-measuring and re-aligning may be required to meet the required tolerances. Typically, adjusting an object for Level first is the easiest method, as ‘Plumb’ will often time be very close after the object has been properly leveled.