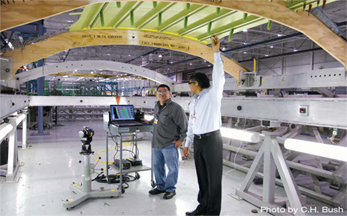 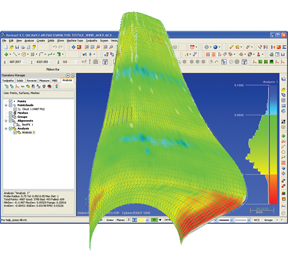 ANAHEIM, CA — Technology is changing the face of aerospace manufacturing and quality assurance. No place is that change more welcome and dramatic than at Vought Aircraft Industries, Inc. in Hawthorne, California. According to Paul Evans, Quality Assurance Lead, changes in processes and systems at his plant alone have saved literally thousands of dollars in time and costs. “At the heart of these changes,” said Mr. Evans – a 34-year veteran with Vought – “is our adoption of Verisurf Software to run our portable CMMs.” Vought first introduced Verisurf into its Hawthorne operations in 2007 when the software was selected for what Mr. Evans called an “across the board changeover … and to prepare for the ramp up for a major model change.”

Vought offers a full range of aero-structure fabrication and assembly capabilities to design and manufacture fuselage panels, empennage and flight control surfaces, nacelles, wings and doors, and other structures. “We build some really big products, up to 60-feet in length, for some of the biggest names in the aerospace industry,” said Mr. Evans. “In a nutshell, we’re a tier 1 subcontractor to companies like Boeing, Airbus, Gulfstream, Lockheed Martin, Sikorsky, Northrop Grumman, Bell Helicopter, Cessna and Embraer. As a result, everything we build has to meet stringent engineering specifications. But beyond that, we’re required to prove that we meet those customer specs. We’ve always met that challenge, but it hasn’t always been easy.”

Vought manufactures the majority of its products in sections and then utilizes complex holding fixtures in assembly to ensure dimensional accuracy.

“Our products are very large, so the only sensible way to handle inspection is to do it in sections as they’re built,”
explained Vought quality engineer Angel Diaz. The company receives the majority of its specifications via CATIA solid models. The specs come with local and aircraft coordinates that are “stripped down” to give the product it’s own reference system. This process further speeds up inspection and analysis.

Said Mr. Evans, “On these structures, our average tolerance is plus or minus thirty thousandths, which doesn’t sound like much, until you realize you’re dealing with structures up to 60-feet long. To make things worse we have to achieve those tolerances in changing temperature conditions, which can cause some pretty wild thermal expansion and contraction.”

Vought uses a combination of laser systems and portable CMMs for measurement. Laser systems measure the large structures, while portable CMMs are used for constructions that can be measured with a 6’ long arm. Before Verisurf, there were significant difficulties in analyzing inspection results and providing appropriate feedback.

Mr. Evans explained, “We’re dealing with large sheet metal assemblies, which are very flexible. In the past, we would take a measurement, then come back and analyze it on a desktop computer with a couple of different software packages. Then we would see that the product was out of spec and needed to be twisted this way or that to bring it into
alignment. We might have to do several iterations like that before we got it right. It was a very time-consuming
process.”

“Because our only proof at that point was a bunch of numbers on spreadsheets, it was difficult to communicate. We really needed something that graphically illustrated the results of our analysis, and that is why we selected Verisurf Software. Verisurf is a very powerful software package,” said Senior Measurement Engineer Joel Gasca. “It resides within Mastercam and uses all the power of Mastercam’s design module. The whole system comes on a disk and installs on a computer as easily as Microsoft Office. Our computers are already connected to the lasers and the CMM arms, and since Verisurf recognizes most of the portable CMMs out there, it was ready immediately to go to work with our
systems.”

After more than two years on the job, clear and easy-to-understand graphics capability and instant answers continue to be the biggest benefits of Verisurf Software. The software is utilized to collect data through the laser and CMM tools and then provide analysis on the spot. It compares the real product against the solid model residing in Mastercam and gives Vought’s team instant and graphical error reports so that its customer, vendors and production specialists can see specifics.

“We’re now able to measure the product as it’s being built,” Mr. Gasca explained. “Previously we didn’t have that capability. All we could do was collect data and then go into some other room to analyze it. Now we’re able to take Verisurf down to the floor, call over the engineers and mechanics and show them exactly what’s wrong. They love it, because the longer an error goes before it’s found, the harder it is to fix.”

He continued, “I guess the bottom line for our department is that it used to take us sixteen hours to do an inspection on a large assembly, eight hours inspecting and another eight on the report. Now we can do the same job in six hours or less.”

About the Author
The Coordinate Metrology Society (CMS)—presenter of the Coordinate Metrology Society Conference (CMSC)—is comprised of users, service providers, and OEMs of close-tolerance, industrial coordinate measurement systems, software, and peripherals. The metrology systems represented at the annual CMSC include articulated-arm CMMs, laser trackers, laser radar, photogrammetry and videogrammetry systems, scanners, indoor GPS, and laser projection systems. The CMS gathers each year to gain knowledge of the advancements and applications of any measurement system or software solution that produces and uses 3D coordinate data.