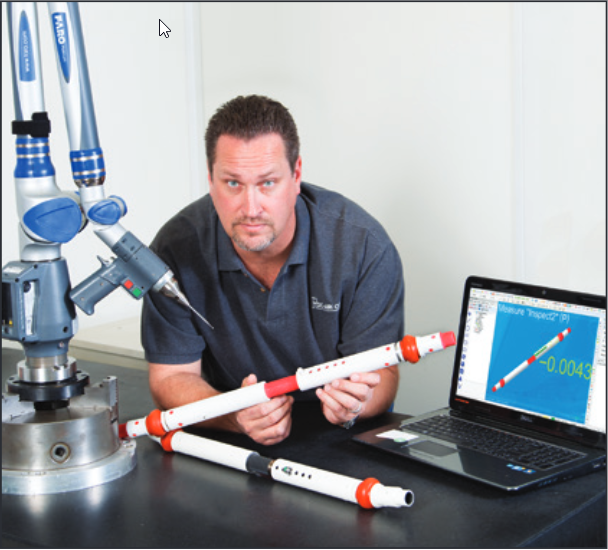 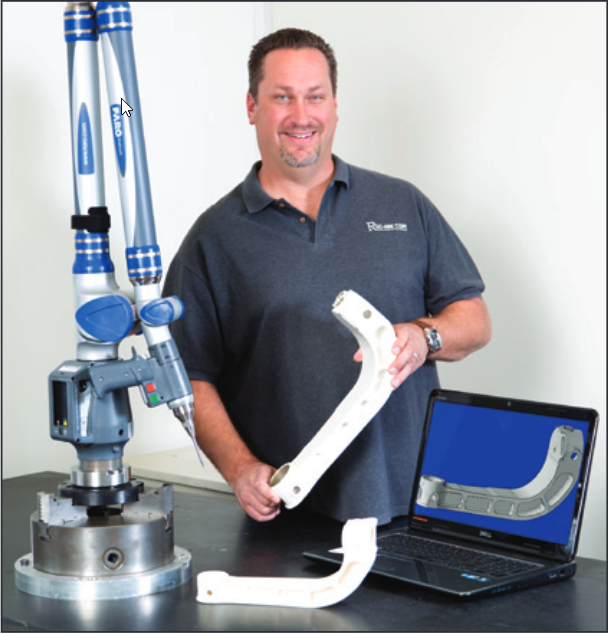 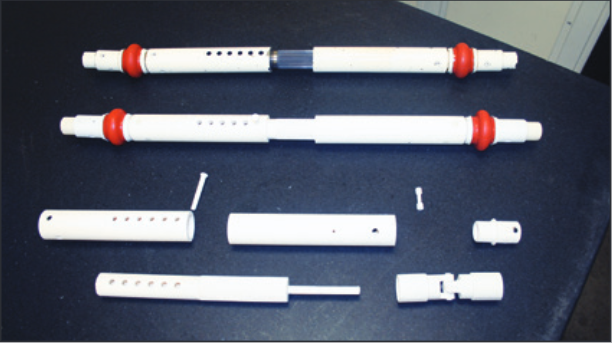 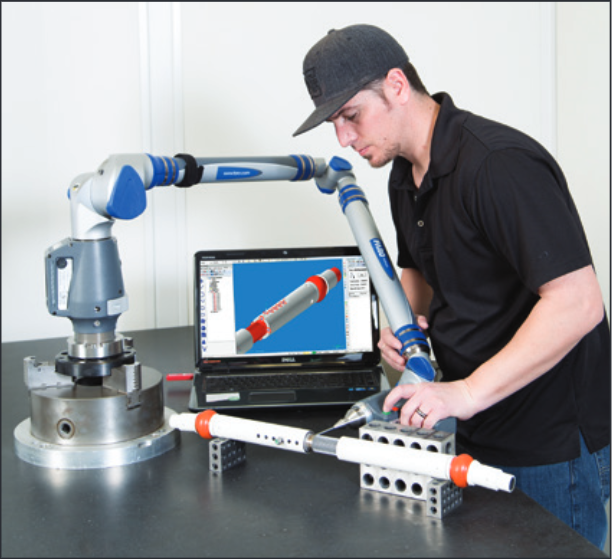 The data was captured to Verisurf Reverse™ using a Faro portable CMM with a contact probe, which was the right choice given the centricity of part. 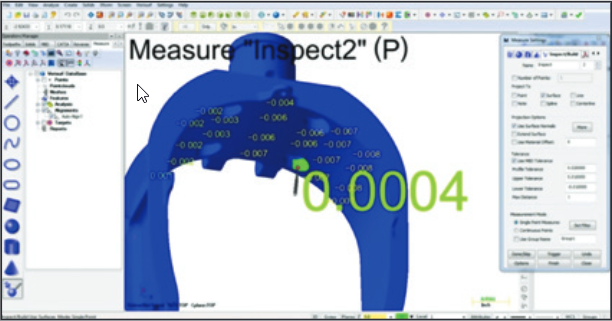 Verisurf Software was used to inspect the 3D printed prototype against the STL files for quality assurance of the model. Shown is the nose gear quality inspection; real-time color coded readout indicates whether the inspection point is in tolerance or out of tolerance (high/low) based on user-defined settings.

Existing landing gear design was reverse engineered from legacy parts using Verisurf Software, the design was modified and presented as a 2/3 scale prototype for engineering review and approval. 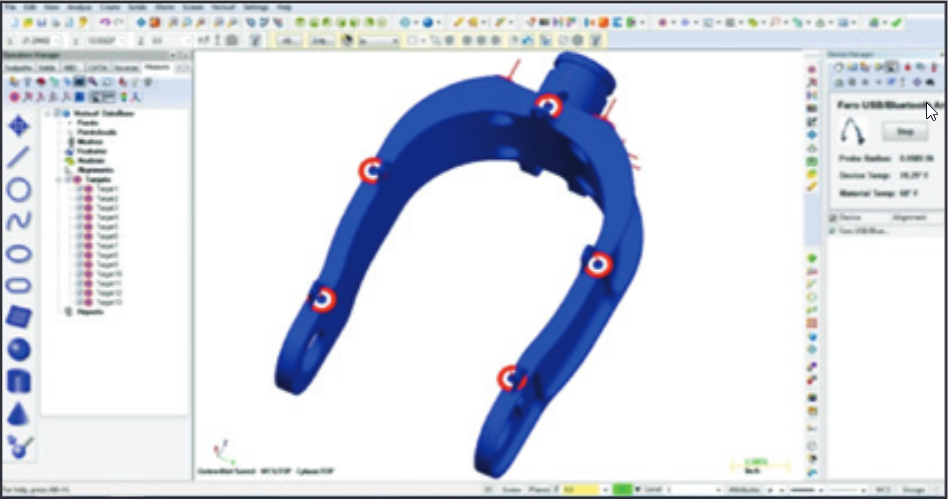 Founded in 1958, innovation has been at the heart of Roc-Aire’s culture from the very beginning; starting with its involvement in the space race and development of supersonic aircraft, like the Lockheed SR-71. One of the Company’s early milestones was to develop a process for machining titanium. Today, as in the early years, Roc-Aire stands out as a “can do” contract manufacturer known for solving problems and overcoming obstacles. “Some people make excuses; we make parts,” said Jason Collins, General Manager. “It’s not just about cost with our customers, it’s about value. We strategize with them on engineering, materials, and processes to make sure the parts we are producing are as good as, if not better than the originals.”

Roc-Aire looks at new and emerging technologies from a practical point-of-view by asking a simple question. Will it help produce better parts, faster? Such is the case with 3D printing or additive manufacturing. The claims and expectations of fused deposition modeling (FDM) technology, or 3D printing as it has become known are varied and evolving, but Roc-Aire has defined an extremely useful solution using Verisurf Measurement Software in combination with 3D printing to provide part realization.

Legacy parts are reverse engineered using Verisurf Reverse™ and then 3D printed to high-precision prototypes to evaluate form, fit and mechanical function. Using Verisurf Measure™ the finished prototype is inspected directly to the original STL mesh model, maintaining a digital workflow throughout the entire process. Whether for new build or MRO applications there are many situations where reverse engineering and 3D printing can improve engineering and build processes while reducing development time. In an MRO scenario, these benefits are amplified by the fact that the aircraft must be taken out of service during the process. “Reverse engineering and 3D printing have proven to be an essential part of our development workflow,” said Collins. “We use the high precision, demonstrable prototypes for much more than just form and fit. Quite often we rely on the prototypes to support customer engineering discussions. The customers appreciate the value add and the interactivity of a prototype leads to more productive meetings with a bias for action. Bottom line, projects move forward more quickly with better end results.” 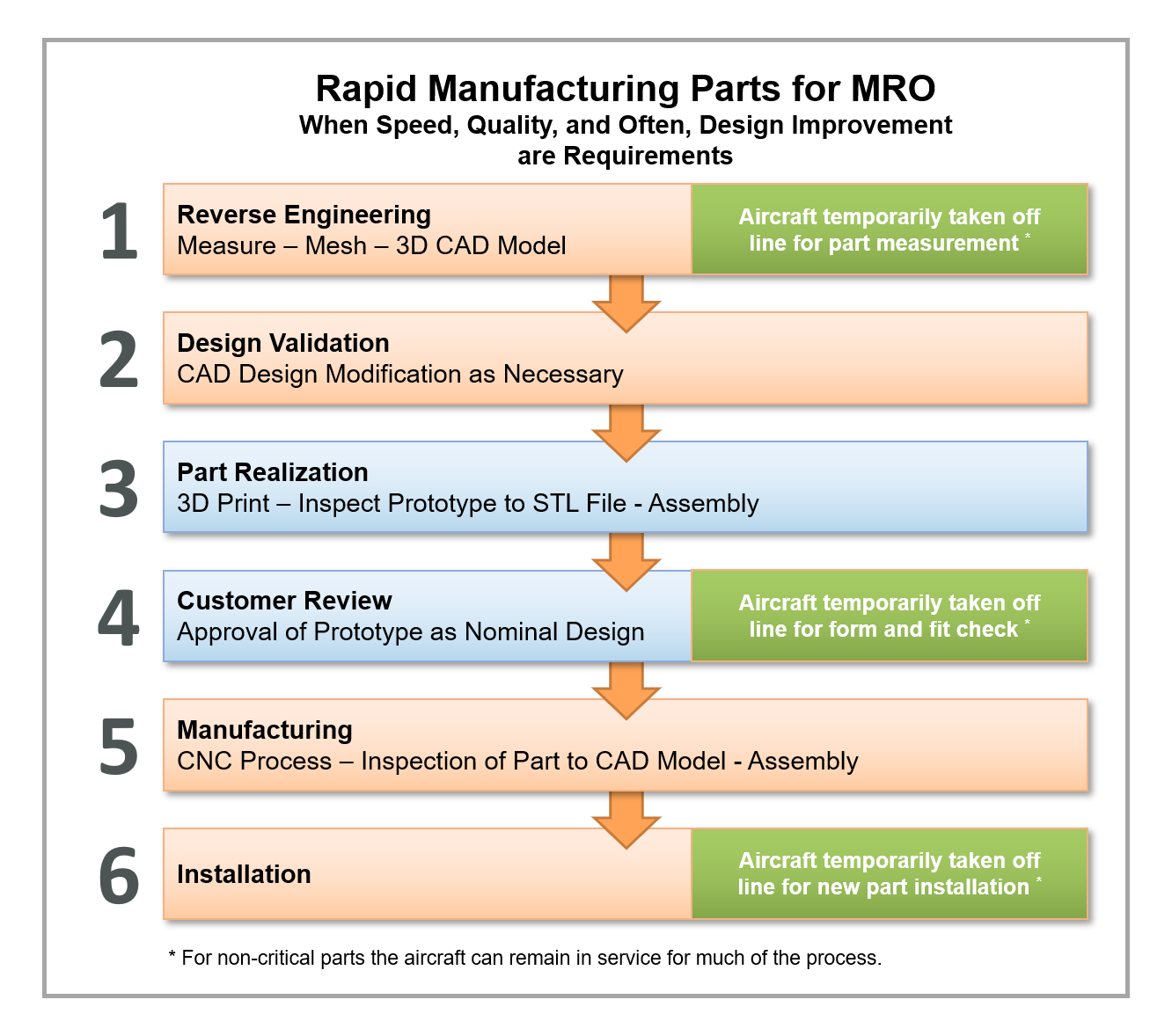 When the parts for an older aircraft need to be replaced there are often no spares, no CAD data and the original tooling is no longer available, or may not be applicable with current technology and processes. After years of use, aircraft can also shift, which causes the original design spec for parts such as ductwork, for example, to no longer fit as designed. Or in some cases, an originally designed part may have a design flaw that can be improved upon. In each case, reverse engineering and product realization provides a practical means for engineers to quickly comprehend identified problems and clearly grasp the recommended solution. A part that would typically take eight to sixteen weeks to tool up for and build can now be produced in a high-precision model in a couple of days. The customer can then do a fit check using the model and approve production with confidence.

Verisurf Software has the ability to inspect high tolerance prototypes either for the STL model used by 3D printers, or for virtually any other 3D CAD format. This provides workflow and customer quality reporting flexibility. A presented prototype and inspection report, all tied to the STL model, can be established as the approved nominal design. Final inspection and reporting of the completed part can be run using the same STL model or the approved 3D CAD model. Either way, the integrity of the digital workflow is maintained.

Roc-Aire was challenged to reverse engineer and build a replacement strut for an aircraft MRO application. The part was spring loaded and had several moving internal components. During the reverse engineering process, the team found design weaknesses in the original part. Instead of bringing the customer a problem, they modified the design and created a functioning prototype. During an engineering review meeting, Roc-Aire was able to disassemble the prototype and clearly illustrate the problem and recommended fix. The engineers were able to handle the part and all of its components. This form of part realization helped speed up the approval process and demonstrated real value-add to the customer. The end result was a new replacement part completed in weeks not months, with minimal downtime for the aircraft.

The process was straight forward. First, the original part was disassembled and each component carefully reverse engineered using Verisurf Reverse. The data was captured using a Faro portable CMM with a contact probe, which was the right choice for this job due to the concentricity of the part. “Contact probing typically provides greater measurement accuracy over non-contact scanning. Non-contact scanning is typically better for checking large surface areas for deviations, or capturing/inspecting complex surface profiles, “says Collins.

Verisurf Reverse software converted the captured point cloud data into STL mesh models suitable for 3D printing and again into 3D solid models for export to popular CAD formats. Design modifications were then able to be made and final prototype components output to a Stratasy Dimension 1200es 3Dprinter. The same STL file used to print was again used to inspect the final prototype components prior to assembly.

Following form, fit and function review the prototype was approved by the customer as the nominal design artifact. Each manufactured component and completed assembly was inspected against the nominal data using Verisurf Software and a Faro portable CMM with touch probe. The software generates a first article AS9102 inspection report for each completed part. 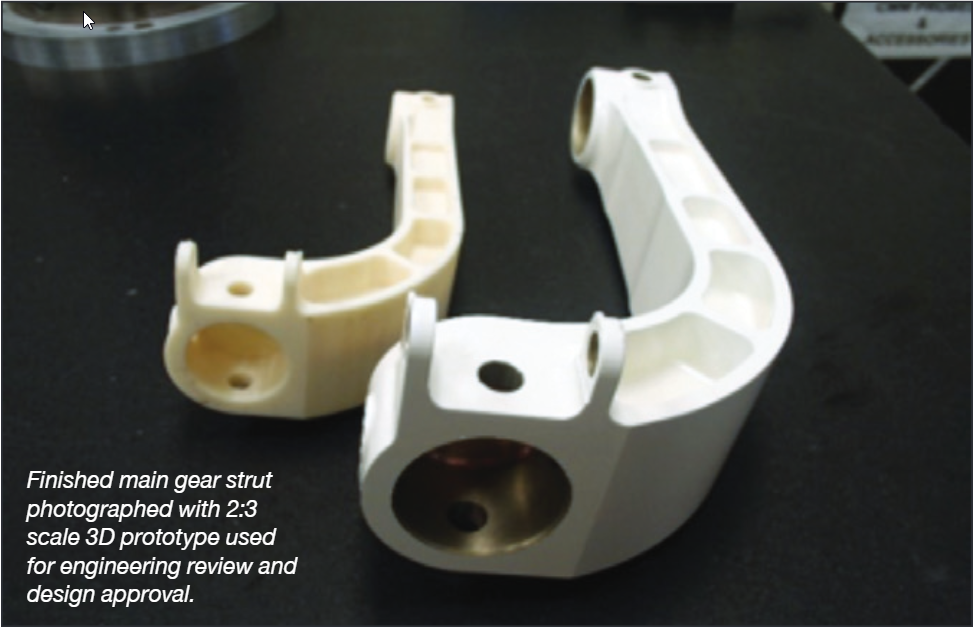 Roc-Aire often faces size challenges when reverse engineering replacement components for legacy equipment, whether it be landing gear, wing struts, or ventilation duct work. In order to speed up the development time of large parts, Roc-Aire creates a reduced scale prototype of the part based on collected reverse engineering measurements; corresponding CAD data and digital 3D Model are maintained at 1:1 scale. During design review meetings engineers are able to interact with the 3D prototype and all of its components, which helps speed up the approval process and demonstrates real value to the customer. The end result is usually a modified part completed in weeks instead of months.