By Daniel Caggiano - MarketingNews
No Comments

When Blackhawks go down Verisurf is used to bring them back into service.

There are two initiatives driving the idea of repair vs. replacement when possible. Reset is the term currently used to describe the equipment refurbishment process. Reset refers to a series of actions to restore units to a desired level of combat capability to commensurate with future mission requirements. Recap, or Recapitalizing involves overhauling or restoring equipment to improve performance or make it like new from the factory. In some cases this involves reconfiguring current assets for future use, other than what they were originally designed for. An example of this might be taking a proven platform from one branch of the military, outfitting it with different systems or modifying its configuration and redeploying it to a different branch. The military’s version of reduce, reuse, recycle, which makes a lot of sense. Many of today’s military assets are made to last. With good MRO schedules and the ability to restore even crashed or battle damaged assets to like new condition, the military can realize extended duty from its equipment. 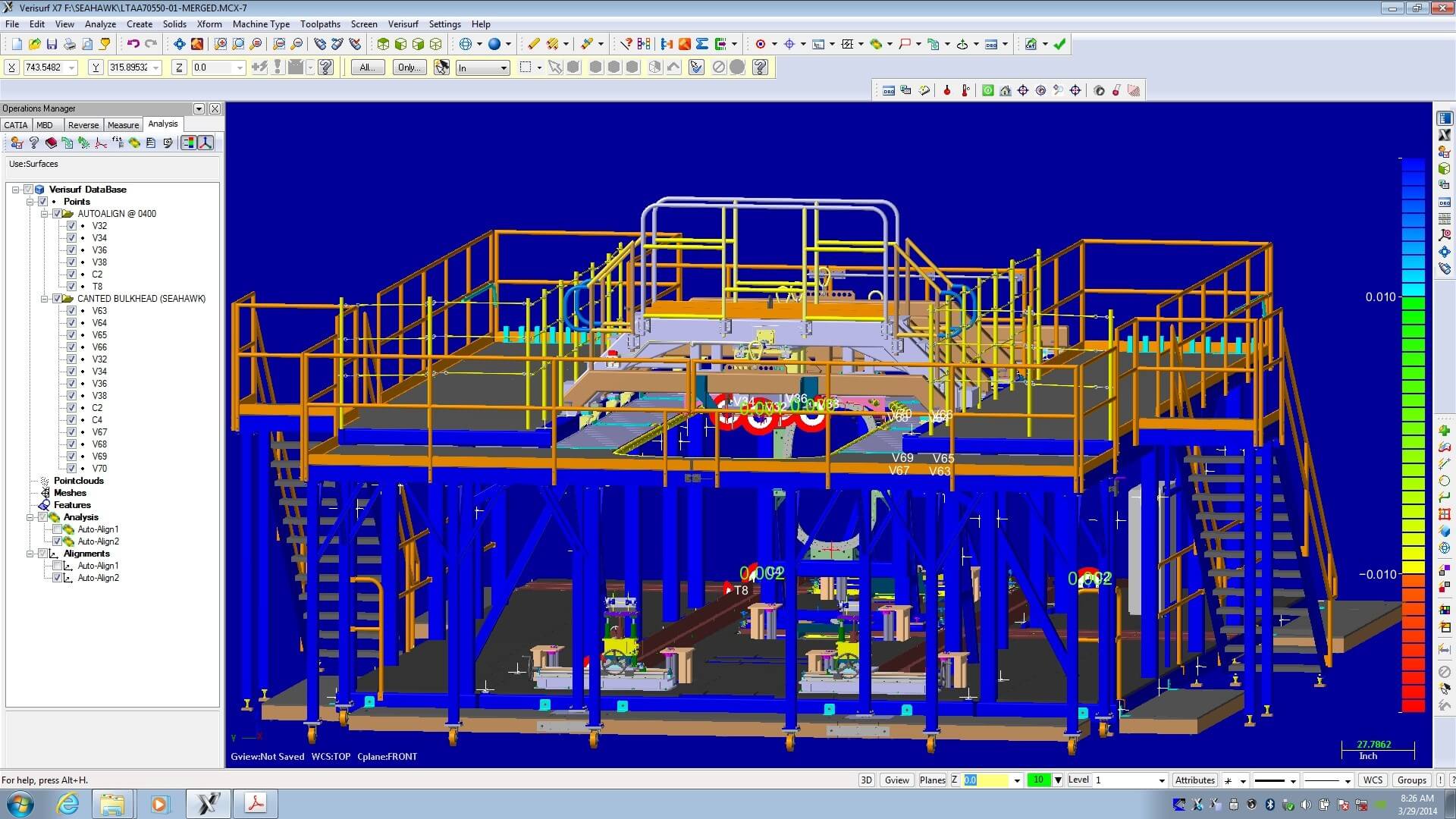 The H-60 Crash Damage Repair System is comprised of a highly accurate LTAA cradling fixture, specialized refurbishment and installation fixtures for different parts of the aircraft, laser tracker, laser sighting tower, mobile computer station and Verisurf Metrology Software. The LTAA supports all versions of the Blackhawk Series Helicopter. Designed specifically for these aircrafts the repair system features extendable deck slides and access for upper aircraft measuring and repair, providing a safe and convenient operational environment. The system can be configured according to Depot hanger requirements. The LTAA configuration relies on a Depot hanger having an overhead crane for loading of the aircraft. The R-LTAA has the independence and convenience of ramp loading the aircraft on existing operational landing gear or cart loaded when landing gear is missing or non operational. With either configuration the damaged helicopter is loaded into the LTAA fixture and aligned using hard point locators. These locators are fixed and associated with the placement of known aircraft components including transmission beams, servo beams, oil cooler, engine mounts, drive shaft brackets, 485 bulkhead, canted bulkhead or drag links. Once the aircraft is aligned with one or more of the hard point critical design coordinates it is securely held in place for repairs and realignment. Three dimensional hard point locating data defining both the helicopter and the LTAA fixture is loaded into the Verisurf software platform. With this data in place, the system can inspect the locations and alignment of installed structure and components on the helicopter. It also allows for “self-verification” of the accuracy and alignment of the fixture itself. The complete aircraft can be refurbished back to its original condition with damaged parts replaced and shifts in alignment corrected. 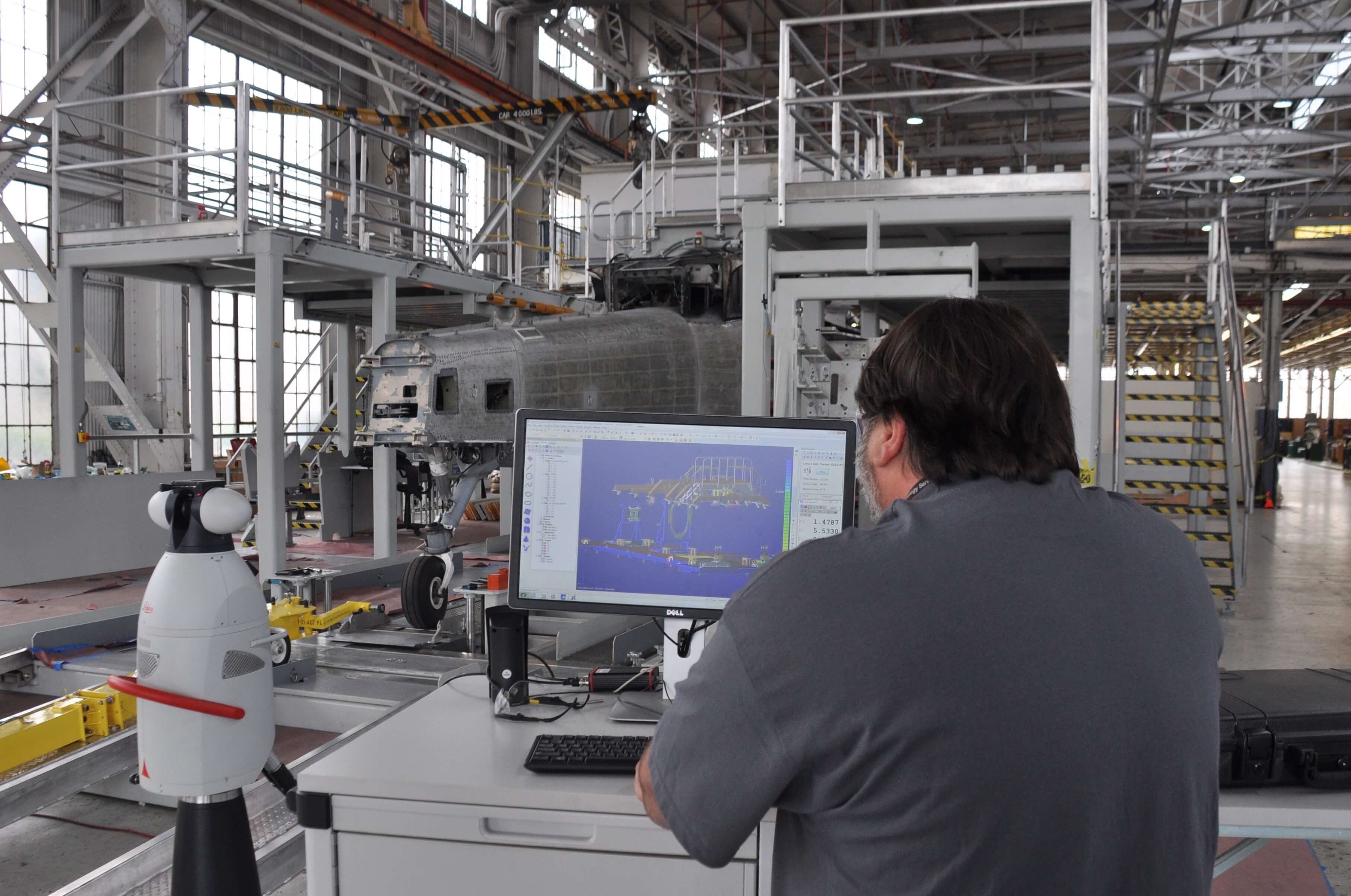 Verisurf Software and a laser tracker are used to support the alignment and verification process. Hard point locators are in fixed positions on the LTAA cradling fixture and are associated with the placement of known aircraft components.

The same precision processes and toolset are used in every phase of the LTAA including installation, assessment, rebuild and validation. Verisurf Software and a laser tracker are used for high tolerance assembly guidance of the LTAA onsite at the depot repair location. Accurate placement and validation of the hard point locators are critical to the installation. Once an aircraft is loaded into the LTAA, Verisurf Measure software and a laser tracker are used to assess the extent of damage and alignment shifts of critical components, compared to the nominal 3D CAD reference data. During the rebuild Verisurf Software is used for assembly guidance to insure accurate placement of components and structural adjustments. Following refurbishment the alignment of the aircraft is validated using Verisurf Validate software. Verisurf Software supports each step in the process by reporting documentation that becomes part of the aircraft’s maintenance records. Should the aircraft develop any problems in the future, such as vibration, there is an accurate alignment benchmark to refer to. The LTAA is designed specifically for the Blackhawk Series helicopters. Similar fixtures and processes will work for the assessment, rebuild and validation of other rotary and fixed wing aircraft, wheeled and fixed assets; essentially any application where alignment or realignment is critical.