Measuring Massive Molds
When working with massive molds, the penalties of rework are greater than those of smaller sized molds 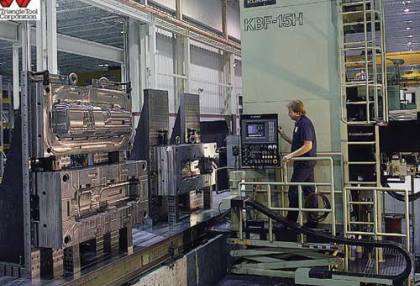 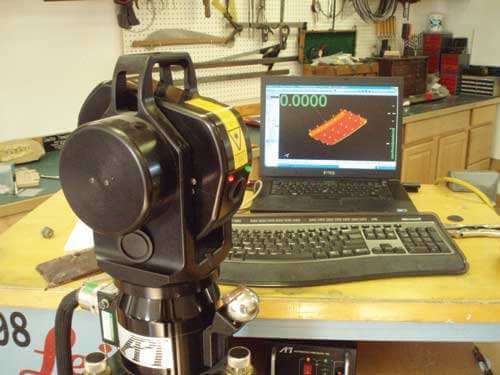 FIGURE 2: A laser 1tracker measures grid points plotted by inspection 2software over the entire length of a mold for a 35-foot helicopter blade. 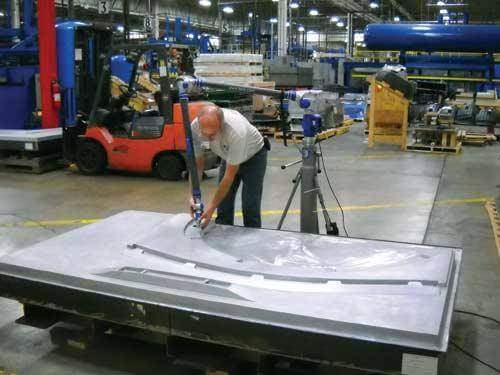 By David Olson, Director of Sales and Marketing at Verisurf Software.
Learn more at https://verisurf.com

Finding that first samples are out of spec means more time, more money and more manpower to rework tools and rerun sample parts. This eats away at razor-thin profits and puts on-time delivery in jeopardy for molds of all sizes. But when working with massive molds, the penalties of rework are even greater. Following are three applications of successful large mold inspection and measurement.

MoldMaking Technology’s 2010 Leadtime Leader Award winner, Triangle Tool Corp (Milwaukee, WI) specializes in injection, compression, structural foam and blow molds for large plastic parts. To protect itself from late, unwanted discoveries on molds that weigh in at 100,000 pounds or more, they inspect with onboard measuring software while fixtured on the CNC mill. Triangle Tool just swaps the cutter with a touch probe and uses the mill as a CMM after finish machining.

Vic Baez, engineering sales manager says, “We want to move these molds as little as possible,” citing the challenges in moving them and the added risk of error when repeating a machine tool setup. Baez continues, “We put a lot of faith in the quality of our work and the skills of our machinists. Yet, we need to confirm the mold’s quality before it hits a 3,000-ton sampling press.”

Transportation, handling and setup are not the only issues that force shops to delay rigorous inspection until sample parts are molded. These molds are simply too big for the bed of CMMs. So moldmakers resort to hand tools, gauges, and templates to do the best they can with a small number of measurements. Limited by accessibility and time, manual inspection increases the likelihood of errors going undetected, especially for Class A surface, contoured automotive parts like bumpers, air dams and fender flairs.

To complete inspection early, an alternative to Triangle Tool’s use of a machine tool probing system is a portable coordinate measuring machine (PCMM). As the name implies, the massive molds stay where they are and the CMM comes to them. PCMMs give moldmakers rapid collection of hundreds (possibly millions) of measurements without all of the programming time and skill set needed with conventional CMMs.

If inspecting against a digital mold model, the process is as simple as picking reference surfaces for alignment and then picking points anywhere on the mold surface. Each measurement takes only seconds and visual feedback is instantaneous.

Delta Tooling (Tacoma, WA) has used the PCMM approach for more than six years. The company makes aerospace tooling, much of it in composites. Its PCMM system—which includes a laser tracker1 and inspection software2—inspects master models and molds used for composite lay-up.

Darrel Mattsen, quality manager, cites a 35-foot helicopter blade as an ideal application of the PCMM. The mold is long, and the composite part’s contours are critical since all blade surfaces affect performance.

Before the PCMM, the traditional approach to master and mold measurement used templates. For the helicopter blade, Mattsen would have selected three or four cross-sections along its length and a few along its width. The templates for each of the contour profiles would be cut and matched to the mold. Mattsen explains, “This approach would take at least a day and possibly two to complete.”

Now Mattsen plots a grid of measurement points in the inspection software. Following prompts, he places a retro-reflective target at each grid point and takes a measurement with the laser tracker. Using the software’s “smart points” feature, measurements are automatically triggered as he passes the target over a grid point. As each measurement is recorded, it is displayed in real-time on the monitor.

“Inspections that took me two days now take me only two hours to complete including all the setup,” Mattsen says. Noting that he captured more than a 1000 measurements, he continues, “With the tracker, we can prove everything to the digital data before the tool leaves to make its first composite part.”

Wilbert Plastic Services, Inc. (White Bear Lake, MN) uses its PCMM to inspect large vacuum-forming molds. The company is a custom vacuum former of custom products like door panels for agricultural machinery. Its molds, which it outsources, can be as big as 8 feet by 14 feet.

Unlike Triangle Tool and Delta Tooling, Wilbert’s PCMM is used during incoming inspection. Before each mold is moved into its shop, it is thoroughly inspected. “We want to minimize movement of these large, heavy molds,” says Mike Axen, tooling inspector.

Before having the PCMM, the company would perform incoming inspection with trammel gages, dial indicators, and radius gauges. This approach severely limited the number of measurements, so mold quality could not be confirmed until samples were run. But this was much too late in the cycle to discover that the outsourced mold needed further work.

Wilbert now uses a 12-foot measuring arm3 with touch probe and inspection software2. Axen says, “It gives us a better feel for the tool. It gives us comfort that we will have good results with the vacuum formed parts.”

With PCMM, Wilbert discovers quality issues before its massive molds leave the receiving area. If problems are detected, Axen has all the data needed to decide if the mold will be returned to the moldmaker or reworked in-house. If he opts for in-house repairs, he uses the PCMM to gather data in the problem area to precisely define the needed changes.

Knowing how resistant small shops can be to the adoption of CMMs, Axen was quick to state, “The system is user-friendly, yet capable of anything we want it to do.” Darrel Mattsen concurs. He noted that while the PCMM is a powerful tool, “It was extremely easy to learn.”

After qualifying their molds with PCMMs, Delta Tooling and Wilbert Plastic Services use the very same portable inspection system to check the

first articles they produce. “It provides us the tools needed to meet customer inspection requests,” says Axen. And when the inspection software reports the results, there are far fewer surprises since thorough mold inspection makes it far more likely that sample parts will be in spec.

As with their massive molds, the inspection comes to these large parts instead of routing them through the inspection department. Both Delta Tooling and Wilbert Plastics literally measure first samples when they are “hot off the press.”