The coordinate measuring machine (CMM) has been around for decades, and it has come a long way in its evolution. For these measurement systems, competition amongst the OEMs is part of what has taken the technology to new heights. Also, third party software developers, service providers, dealers, customers, and competing technologies drive improvements in CMM capabilities and efficiencies as well. The main purpose of the CMM is precise dimensional shape and size measurement, which includes the position and orientations of features on the part and the relationships between features. CMMs come in all sizes to suit the size of parts and accuracy needed for them, as well as budget and other practicalities. There are a small number of machine types that have evolved and are prevalent in the market, and this article intends to present an overall look at the basic characteristics of their structural layout. This might be helpful towards understanding which style suits your needs best when looking for a system.

The most common style. Its key design feature from which it gets its name is an upright structure consisting of two vertical beams that support a horizontal (bridge) beam connecting the two vertical elements. The bridge structure moves back and forth transiting the table moved by an electric motor and its position located by means of precision measuring “scales.” Scales consist of a fixed tape which is decoded and interpreted by reader heads that are affixed to the moving structural element. Older systems operated via an analog system which read position via electronic signal, interpreted by a decoder, then transmitted the position signal to the machine controller. Analog systems have been supplanted by digital scales that communicate via hexadecimal data stream communication (although there are still analog systems in use). Digital scales are now the standard.

Suspended from the bridge beam is a vertical moving beam that is also motorized and positioned by a scale of its own. It has a moving main structural element that carries the probe and probe mechanism (head). The design is optimized for accuracy, and it is fair to say at a slight loss of access to the measurement table, meaning diminished access to the inspection article. Due to its accuracy and prolific acceptance and distribution, bridge CMMs come in many sizes. They are offered in sizes from smallish, maxing out at microwave oven-sized parts, to largeish, maxing out at maybe the size of a Smart Car. 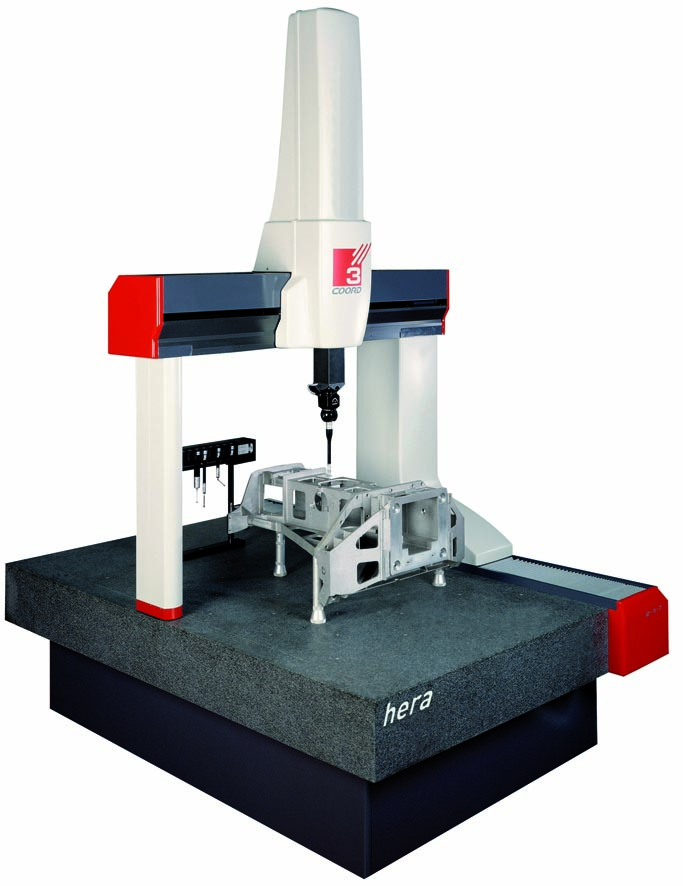 Has a structure that unlike the bridge type CMM with two moving, vertical beams supporting the probe head cross beam, the cantilever CMM has its cross beam supported only on one side, therefore cantilevered out from just that side. The side support has a rail at the top along which the cross beam moves (in the X direction, for example). The vertical probe support beam transits the cross beam (Y direction) and has the mechanism that moves the up/down Z strut that carries the probe head. The design gives better access to the inspection table but suffers some in accuracy. Since the droop effect would multiply as it extends further from the vertical beam, the cantilever design is better for smaller parts and possibly when access takes precedence over accuracy. 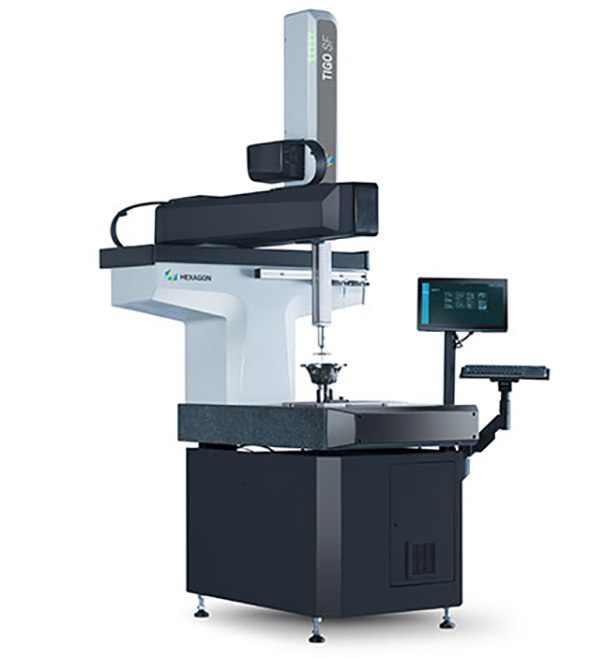 Pros – Easy access through 3 out of the 4 sides to the inspection table. Better for automation and part changeout. Somewhat less expensive. Suited to smaller parts.

Cons – A degree of reduced accuracy. Less common these days so support, parts, repair may be an issue.

More popular in the past than today. Less expensive. Open access to the table albeit a little less so than cantilever design. Has been very popular for automobile design and shape development (clay modeling and sculpting) along with whole-car body panel measurement where the attach points and relationship between panels are of interest. (Non-contact scanners have all but taken over the job of body panel and stamped part contour analysis and compliance with Class-A customer-facing smoothness and continuity. This is also true for reverse engineering, as-built, and tool development of stampings or non-metallic ‘body-in-white” for automobiles.) A common variation of the horizontal arm setup is pairing two towers with probing heads, basically two CMMs in one, so that both sides of a car can be reached easily in one setup (or similar scenarios). Versions of horizontal arm CMM were a low cost, sufficiently accurate, granite table-based design. The auto body type versions are usually mounted to the floor instead of on a granite table, giving them a large measurement range. 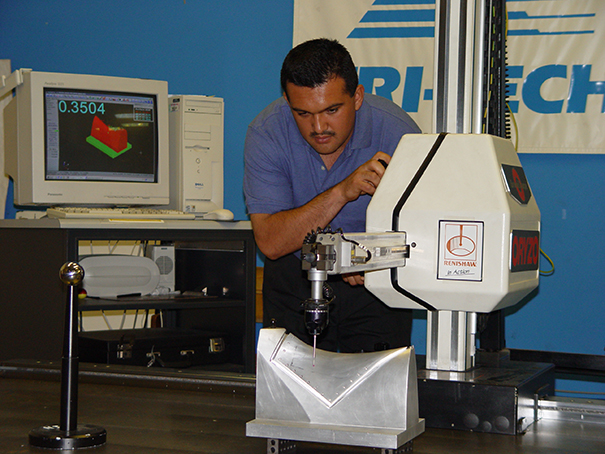 Cons – Getting harder to find parts. Less accurate. Non-contact laser or white light scanning types of technologies have supplanted some of this machine design’s main market.

Normally designed for and thought of as a CMM for larger parts. But there are some smaller versions as well. For the big ones, there are two large steel fabrications erected as the machine side structures, with the cross beam running on top-mounted rails down the length of those structures. With the Z beam suspended from the cross member, it can transit the cross beam while moving up and down to accomplish the Z movement. Big gantries are mounted to the floor typically, and smaller ones can have the usual granite table as its base. 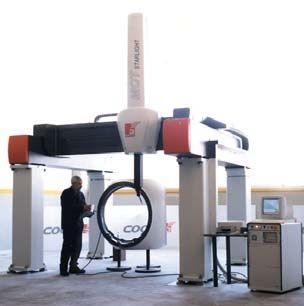 Pros – Appropriate and accurate for large parts. Stable, rigid structure. Its possible that the design has been proven to be or accepted as good for the shop environment.

Cons – The least access to the table and inspection area where the inspection article is clamped. The large gantries are cost-prohibitive unless needed for tight tolerance, large parts.

The most common CMM arrangement involves the CMM designed for and requires a climate controlled CMM room or metrology lab that houses one or more CMMs isolated from the shop environment. This controlled setup reduces inconsistencies and unknowns of an unstable environment, with temperature variations being the main concern. But there are a number of benefits of having the CMM close to the work, possible in a work cell, maybe with automation, and might even be operated by the same personnel who make the parts. Not necessarily new but becoming more common are shopfloor CMMs. These machines generally eliminate the commonly used air bearings, environmentally controlled room, and high voltage requirements of typical CMM setups. They bring the machine to the work. They deal with temperature variations in the shop via designed-in compensation hardware and software features. “Inspecting 3D features during the manufacturing process minimizes reaction time for machining adjustments.” (source Metrology News) 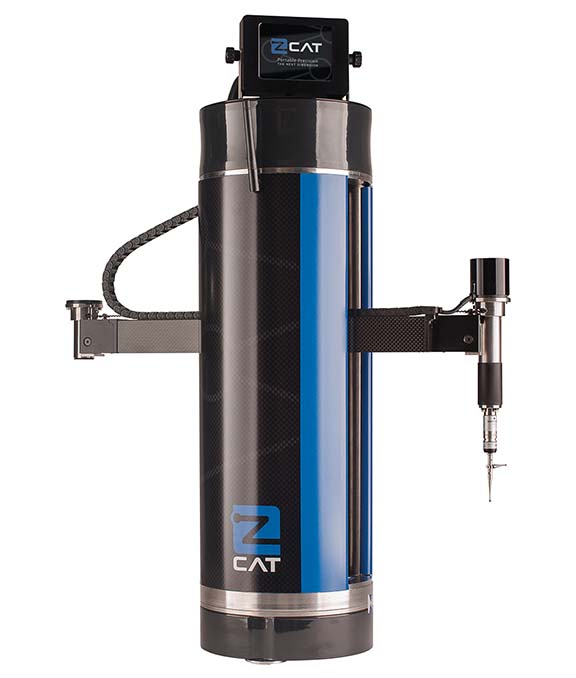 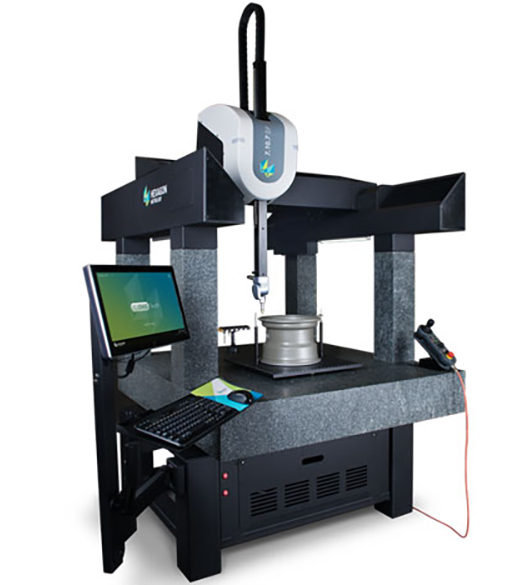 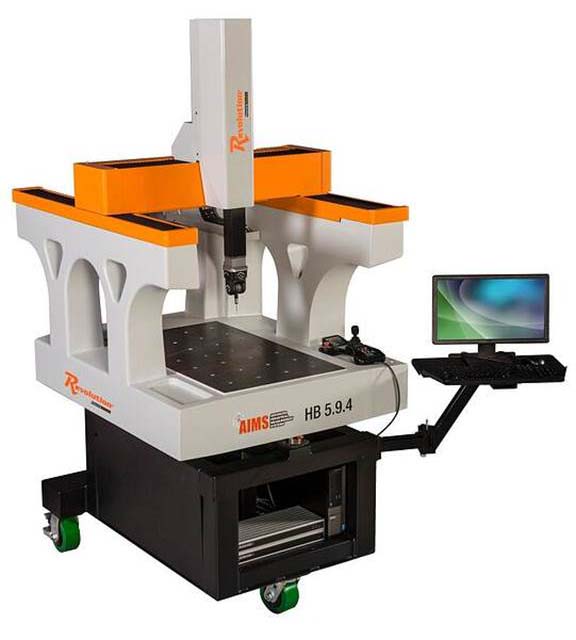 Pros – Parts are dispatched quicker, less waiting for processing through the CMM lab. The closer the discovered problems are to the problem source, the quicker and easier they are resolved. Better ownership of defects by the part makers, and fewer disputes between manufacturing and QA. Parts are measured in the same environment in which they were made, possibly eliminating uncertainty of thermal expansion.

Cons – The trained CMM experts may not be as accessible as they are in a CMM lab, so personnel issues may arise. Not everyone is convinced that the manufacturing environment is suitable for CMM inspection. Even though the machines are made for the shop environment, they are still exposed to environmental and shop impurities that can cause harm to them. Control, maintenance, assurance of machine accuracy and calibration status may be more difficult to maintain.

There is a lot to consider when deciding on a CMM type to fit the needs of your enterprise, and much depends on the use-case, accepted technical association’s rules and standards, typical part size and accuracy and repeatability requirements. Another influencer for sure, is the support and expertise that exists in your region. This is not an aspect that should be left out. When beginning use of CMM technology for the first time, and even for your needs that you will face down the road, you will find that good technical support and consulting assistance is crucial to success.